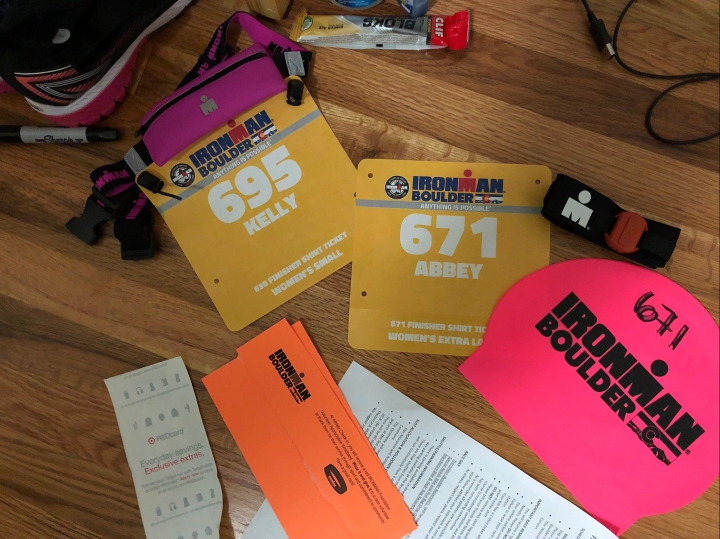 I’ve been planning or thinking about posting this post for a while now. Since September of 2017 to be exact… when I was sitting in the kitchen at my parents’ house [with a large glass of wine] and hit “submit” on an online application and credit card payment that would secure me a spot in the June 2018 Ironman race in Boulder, CO.

And, I mean… I knew I wouldn’t post something right away… I needed to get rolling on training and wrap my head around what I had just committed myself to, but I didn’t really think I would be writing the first/only pre-race post about 24 hours before I ran into the perfectly cool water of the Boulder Reservoir. BUT OF COURSE, to those that know me or have followed any of the posts on this blog, no one is realllly going to be surprised by this timing. Including myself.

So here we are now… I convinced my endurance-BFF, Kelly, to join me in this crazy IM adventure (will be her 3rd IM), we’ve been training for real since about January, put in the time, tapered and have now been in Boulder for 5 days to acclimate (as best we can) to the altitude. The race is 24 hours away.

And here is what I want to share — this has been one of the toughest things I’ve ever trained for… no. Nope. Not “one of” — the toughest thing I’ve ever trained for. It has also been one of the most rewarding training experiences I have ever had. All long swim and bikes included. That’s not to say any of my past events weren’t challenging. THEY WERE. But Ironman has been different.

Ironman has always been on my bucket list. But in the far future. I never really saw myself doing it “now.” Most of you know I have some OW swim goals I’m pretty passionate about that have been my focus. That is until Bike Beyond. When I was accepted on to the Bike Beyond team, it shifted my focus from swimming to cycling. It goes without saying that I definitely increased my ability on the bike after a summer of riding everyday. So, my brain said — hey! you can swim. now you can bike. maybe you should learn to run and just check that IM box off the list! — sweet, brain. thx. So, I signed up and bought some running shoes.

I realize it sounds a littttle crazy. But, um, hi, endurance athlete. From day one, I’ve been telling people I’m equal parts excited and terrified. But never terrified enough to think I can’t do it… most of the time 😉

So, what is different with this race? Typically training is about putting in the time. Doing the physical training. When you sign up for a race, you know how long you have to do said activity and you know how many months/days you have to prepare your body to accomplish that task. Easy. For the most part, you CAN train your body to do what you want it to do. It just takes time. And commitment. And sacrifices. So, this is what I was prepared to do. What I didn’t expect was the mental toughness and challenge that would come with training for this event.

I’m a pretty optimistic person. I’d say my positivity waivers sometimes, but in general I’m optimistic. Credit my Sagittarius star sign for all my wanderlusty-last-minute-travel-do-it-all attitude that just always thinks everything will turn out fine. And during this training, for the first time (in any training season), I went to a dark place. And there were times I didn’t think everything would turn out fine.

Being new to both running and training for three sports at one time was a nightmare for managing blood sugars. I went through periods of constant lows and then through a period of highs every night and lows during the day, and then through a period of highs during workouts. Periods of “consistency” in blood sugars were short. This led to A LOT of missed workouts, or workouts cut-short. Based on my “put-in-the-time” theory, missing workouts created anxiety and concern. When I say a “dark place” — its something I can’t describe because I had never experienced that feeling before. If I missed a workout or had to cut one short due to blood sugars, it was hard for me to go back and finish that workout or reschedule it. And partly because there wasn’t actually enough hours in the day — but also because I just wanted to say f–k it. And curl up and take a nap and pretend it didn’t happen. Honestly, guys, it was weird. And I hated it. And while I don’t ever want to blame T1D, or ask for sympathy, this time I DID want to blame it. I DID want to say to my [amazing] training buddy (and everyone else training for IM) -— you don’t get it! you’re SO lucky you can train for this event without worrying about missing a workout or blood sugars and all the shit.

But, I’m NOT here to do that. Everyone has their own personal challenges — mental and physical — that they are working through. And THIS RACE IS INSANE and challenging for everybody.

Oh also — I cried. A lot. Haha. I cried at home. I cried at work. I cried at the gym. I’ve never cried during training before. That whole “blood, sweat and tears” thing. VERY REAL this time.

So, what was rewarding??

Well… first of all… tomorrow at 6:30am, I’m going to be at the starting line. You know how those cheesy motivational things are like — you just have to get to the start! Yeah. I used to think that was garbage – until now. Making it to that beach tomorrow AM has been a journey and I’m honestly so excited and happy to get to the start line. As some wise human once said — DNF is better than a DNS 😉

Second — I LEARNED TO RUN. When I started running last fall, I couldn’t run 2 miles without walking, and it hurt. It was hard. Enter a brilliant coach and the idea of ‘heart-rate-training’ an, now I’m running distances I NEVER imagined I would have run. A  couple weeks ago I ran my longest pre-race run of 20 miles. TWENTY FREAKING MILES. That’s my commute to work. This puts a marathon within reach of completion. I went from 16min miles to 12min miles in the last 5 months. This is already a wild accomplishment for me whether I finish IM or not.

Third — I got to train alongside one of my best friends. Well.. train “alongside” is… not the most accurate of term, but with one of my humans nonetheless. Kelly signed up for Boulder after her Kona finish last year. It will be her 3rd IM in 2 years and I don’t think she wold have signed up for Boulder if I wasn’t doing it. She is SO SO talented and it has been both motivating and aggravating training with her [love you, Kel!]. While I’ll be going to finish the race, she may be placing in age-group. She is my endurance spirit animal and we’ve always been training for long distance events together, but they have never been the SAME event. I don’t think I realized how amazing it is to have her here and a part of this moment for me until we got to Boulder. Having another human to attend all the events and work on taper/training while in Boulder and get excited with you and calm your nerves and talk you off the ledge and jam to Backstreet Boys for a 14-hour car ride with me has been invaluable. This event means so much more to share it with her.

Okay, okay… I’ve already written MUCH more than I told myself I would.

I’ll close with a very important OMG THANK YOU THANK YOU SO MUCH to my family and friends and work fam for supporting me to this point. That cannot be stated enough. I don’t take for granted your words of encouragement, listening when I just needed to vent or cry and not hating me for missing or being late to your events due to training.

The race is in less than 24 hours. The cut-off time to “officially” be an Ironman is 17 hours. That’s my goal. Anything less than that is icing on the cake. Anything more than that is fine too. I’m going for that finish line.